A team of young Turkish engineers have developed a foreign object debris detection system, which aims to enhance flight safety and reduce damage, which is estimated to cost the aerospace industry around $14 billion per year.

In an interview with Anadolu Agency Thursday, Aziz Kose, one of the founding partners of Ankara-based ArgosAI Technology, said: “A-FOD is a smart system for detecting the Foreign Object Debris [FOD], which can injure airport or airline employees and damage airplanes."

"The system works in real time and tracks the smallest objects on the runway in any weather condition," Kose said, adding that all areas of the runway get scanned 24/7 using the system, while images of foreign objects were captured with cameras located at the side of the runway.

"The images are then analyzed in real time, and identified with high accuracy through advanced artificial intelligence, after which the air traffic control and relevant ground staff are alerted instantly," he said.

Kose went on to say that the system's simple interface enables staff to examine the foreign object remotely in detail using the provided location information.

"The staff then decides whether to remove the object before it causes any damage," he added.

Alphan Karadeniz, the other founding partner, said the FOD is pinpointed by a laser line marker, which helps in detection and retrieval on site.

Noting that the A-FOD does not hinder air traffic or flight safety since it does not use an electromagnetic system, Karadeniz said it also worked well in even inclement weather conditions, and meets all the relevant specifications of the U.S. Federal Aviation Administration.

"All data is saved in the database for statistical analysis, creating solid input for airport FOD management process," he added.

Located within the premises of Middle East Technical University’s Teknokent -- Turkey’s first technopark -- ArgosAI Technology’s project was also endorsed by the Scientific and Technological Research Council of Turkey, through its Program of Individual Young Entrepreneurs.

Foreign object debris found at airports could create a hazard not just to aircraft and equipment, but also to personnel.

Coming in different sizes and shapes, and from different sources, they can be found anywhere at the airport including taxiways, runways, aprons, terminal gates and run-up pads.

It generates very serious maintenance costs for the aircraft, with potential delays and cancellations. In Turkey alone, the annual cost to the aviation industry runs into tens of millions of dollars.

The FOD also increases the risk of crashes, as in the case of the Concorde crash nearly 16 years ago.

The Air France Flight 4590 crashed during takeoff in northeastern Paris on July 25, 2000, after a small piece of metal -- which had fallen off the engine of another airliner -- landed on the runway, shattering one of its tires, and rupturing its fuel tank.

All 113 people aboard died in the ensuing fire and fatal crash.

SEAL OF EXCELLENCE (Mükemmeliyet Beratı) given by the European Commission, Horizon 2020

ArgosAI in AIRPORT SHOW in DUBAI 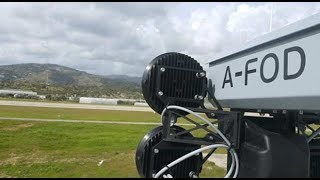 ARGOSAI IS THE WINNER OF TECHNOLOGY AWARDS

ArgosAI has become a member of TSSK / ArgosAI TSSK üyesi